How To Guides, Lighting Guides 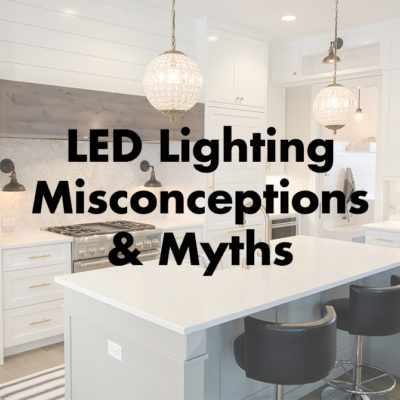 Early LED lights did have issues with brightness. However more modern LED lights are generally lighter than halogen bulbs so a 5w LED lamp can be as bright as a 50w normal light bulb. LED lights use less energy.

The initial cost of LED lights can be more expensive than traditional bulbs. LED lights have lower energy consumption and tend to last a long time, usually around 15 years.

LED bulbs tend to consume substantially less energy than traditional bulbs. An LED bulb can use just 5w of energy whereas a traditional bulb can use 50w. If LED lighting is used throughout the house, then there is a significant decrease in energy required. LED bulbs also tend to be more efficient at turning energy into light which assists with lowering energy consumption.

Lower quality LEDs have been manufactured in the past that have caused the misconception to occur. These LEDs were cheaply made and therefore lasted a very short amount of time.

Our modern, high quality LED lights are tested for quality standards and can last up to 17 years when used for eight hours per day. These LEDs can actually last a lot longer than traditional bulbs.

LEDs do product some heat. However, they don’t product as much wasted heat as traditional light bulbs, which has led to this misconception.

The European Commission has confirmed that LED lighting is safe to use in your home, office and anywhere else requiring lighting. Also, the lights will not damage your eyesight as the light intensity of LEDs is similar to traditional lamps.

LEDs work fully from the moment they are switched on. They do not require any time to warm up or turn on.

We also use third-party cookies that help us analyze and understand how you use this website. These cookies will be stored in your browser only with your consent. You also have the option to opt-out of these cookies. But opting out of some of these cookies may have an effect on your browsing experience.
Necessary Always Enabled
Necessary cookies are absolutely essential for the website to function properly. This category only includes cookies that ensures basic functionalities and security features of the website. These cookies do not store any personal information.